This story is part of the American Cancer Society’s Cutting-Edge Cancer Science series, which is exploring some of the most promising areas of cancer research in depth.

This is part 3 of a 3-part feature exploring what personalized medicine means for cancer patients. Part 1 covers the basics of personalized cancer care and part 2 reviews where it stands today. 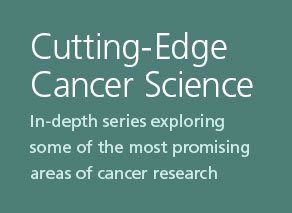 Personalized medicine is not just important for cancer treatment, but also for cancer prevention. With the knowledge of the mutations linked to cancer and access to more cost-effective genetic testing, researchers and doctors are increasingly able to identify if a person is at a higher risk for cancer and if a cancer patient is at increased risk for getting another cancer.

In terms of whether patients are able to handle this type of information, Moffitt Cancer Center researcher and American Cancer Society grantee Susan Vadaparampil, Ph.D., says so far so good.

“When it comes to the psychological impact of receiving genetic risk information, for those who test positive [for a genetic risk], we find that people do well over time.” Vadaparampil says the research thus far doesn’t show what she and others had anticipated – “a lot of long-term distress as a result of getting the information – in fact what we tend to see is that most people are proactive and engaged in risk reduction behaviors.” People who test positive tend to take action through “engaging in enhanced screening, risk-reducing surgery, or chemo prevention,” Vadaparampil says.

As the amount and complexity of genetic information grows, it is getting harder for patients and doctors to determine what it all means. “There are a lot of abnormalities that can show up in genomic analysis, but the question is what do they mean, and we don’t know yet what they all mean,” says Leonard Lichtenfeld, M.D., deputy chief medical officer for the American Cancer Society. “We need to be able to separate the signal from the noise.”

Angelina Jolie Pitt provides a recent high-profile example of not just the power of genetic information when it comes to cancer care, but also of the challenges of making sense of it all – and ultimately determining what action, if any, to take. In a March 24 op-ed published in The New York Times, Jolie Pitt detailed her journey to making the decision to undergo preventive surgery – to remove her ovaries and fallopian tubes – because of her increased risk for cancer. Jolie Pitt found out through genetic testing that she has a mutation linked to breast cancer and ovarian cancer – BRCA1.

Susan Vadaparampil, Ph.D., a researcher at the Moffitt Cancer Center, is studying the impact of genetic testing.

Susan Vadaparampil, Ph.D., a researcher at the Moffitt Cancer Center, is studying the impact of genetic testing.

Vadaparampil is thinking a lot about what more research and other work is needed to ensure that as genetic testing expands, the industry and experts continue to deliver this information to the average person in a useful way.

“We have gotten good at BRCA specific genetic counseling,” Vadaparampil says. “But now providers are using panel testing – so for almost the same price, we can test not only for the BRCA gene, but also for other genes that may increase risk of developing breast cancer.” This type of genetic testing makes it “too hard to talk about the intricacies of every single gene, so how do we best deliver that information so people can make informed decisions, but the process is still efficient?”

Additionally, much of the prior research on the impact of genetic testing has been done among primarily white patient populations who are getting care at a major cancer center.

Vadaparampil, with the help of an American Cancer Society research grant, is studying genetic testing for breast cancer risk among minorities and patients who are getting care from various different types of facilities. Her goal is to determine what the unique support needs are for this population in terms of helping them gain awareness of and know what to do with genetic testing information.

“We should look to the past to think about the future,” says Vadaparampil. “Think about BRCA testing, it has been available since 1995, and now, many years later, we are still seeing low rates of utilization.” “Realistically speaking, many of these things are going to take time – not just in terms of the healthcare provider and patient, but also the larger system – health records, financing, health communication strategies – all those things have to evolve,” Vadaparampil says.

Learn how to apply for a research grant from the American Cancer Society.

Learn how to apply for a research grant from the American Cancer Society.

American Cancer Society news stories are copyrighted material and are not intended to be used as press releases. For reprint requests, please see our Content Usage Policy.