All Cancer Facts and Figures 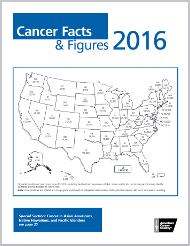 This annual report provides the estimated numbers of new cancer cases and deaths in 2016, as well as current cancer incidence, mortality, and survival statistics and information on cancer symptoms, risk factors, early detection, and treatment. In 2016, there will be an estimated 1,685,210 new cancer cases diagnosed and 595,690 cancer deaths in the US. (Please note: The projected numbers of new cancer cases and deaths in 2016 should not be compared with previous years to track cancer trends because they are model-based and vary from year to year for reasons other than changes in cancer occurrence. Age-standardized incidence and death rates should be used to measure cancer trends.) 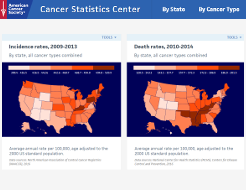 Visit the American Cancer Society’s Cancer Statistics Center website to explore, interact with, and share cancer statistics. The website provides detailed statistics on a range of topics including:

In 2016, an estimated 57,740 new cancer cases and 16,910 cancer deaths will occur among Asian Americans, Native Hawaiians, and Pacific Islanders. This year’s special section reviews cancer in this population, including incidence and mortality rates with a focus on major cancers and those with higher rates in this population, as well as the prevalence of cancer risk factors and screening. It is intended to inform anyone interested in learning more about cancer in Asian Americans, Native Hawaiians, and Pacific Islanders, including policy makers, researchers, clinicians, cancer control advocates, patients, and caregivers.

This supplemental data set provides the estimated numbers of new cancer cases and deaths in 2016 by state for 21 cancer sites and by age group for the four major sites (lung, breast, colorectum, and prostate). Also included is the lifetime probability of developing and dying from cancer for 23 cancer types and the estimated number of cancer survivors who were diagnosed within the past 5 years by state. These data can be used as a resource for cancer control planning at the state level, as well as to address questions from the media or constituents. Divisions are encouraged to share this information with staff and volunteers, and to use it with state and local officials, reporters, and other public health and advocacy groups in local communities.

Most Requested Tables and Figures

The following presentation provides an overview of current cancer statistics in the US.